Bio: I was born in Brooklyn and, with the exception of a few rural years, lived there until my late teens. My mom, an enthusiastic singer, loved music and valued a musical education, so I began studying a tiny violin at age seven. As I grew older I moved on to piano, voice and classical guitar. I was insecure as a child and a teen, and muddled around neurotically in three different undergraduate colleges, starting with a semester studying opera at the University of Michigan. At one point I took a year off from school and moved to Greenwich Village, timid but determined to explore a different environment. It was very educational!

Around that time I gravitated to folk music and swapped my nylon-stringed guitar for steel strings. Eventually I returned to school, graduated from Columbia with a degree in Performing Arts and Creative Writing, and a few years later picked up a Master's Degree in Social Work, because I loved working with people and wanted to move past low-paying office jobs. I'll be honest here. I didn't think myself destined to have a career as a musician. Having been raised in a very traditional household, I believed the primary goal of a woman was to get married and raise a family and--in the immortal words of a heck of a lot of children's stories--"live happily ever after". I went in search of that storybook ending.

I got married and set out to live happily ever after. Hmmm. I loved my children enormously, but I couldn't get the hang of being a suburban housewife. Looking back, it's astonishing to realize how different things were before "The Feminine Mystique" came along. So many of us felt isolated out there in the suburbs, where the men left us in the morning and returned at dinnertime. We had no idea how many other women felt that way because we felt too guilty to raise the subject. While I never stopped playing music it remained a passionate hobby until, after years of being a "mad housewife", I began toting my guitar to Greenwich Village and singing at open mikes, trying to get gigs. Besides being about two decades older than the other aspiring folkies, I kept singing the old songs at a time when the original-song tide was sweeping all before it. Folk Club managers repeatedly told me I needed to write my own material if I wanted a gig. I decided I needed to try.

Try. Try. TRY! Love, loss, sorrow, all that stuff: hadn't it been explored enough already? It turned out, as I realized when I began looking at my life more closely, that it can never be explored enough. There is always more. After several months of chewing on my pencil and trying to think of "interesting" things to say, my breakthrough came, ironically, while I was washing dishes after dinner, gazing out the window and remembering the traveling carnivals that used to set up in the town near where we'd lived for a few years when I was a child. An image of a gentle teenage girl riding the ferris wheel with her boyfriend came into my head, and after that I was "up and running". Songs literally poured out. Unfortunately, as my pursuit of performing jobs increased, my marriage deteriorated under the weight of my husband's growing dissatisfaction with the need to accommodate what he saw as an intrusion into his vision of an ideal home life and a wife's role--his own "happily ever after". Ultimately, the marriage didn't survive. In the context of our mutual failure to keep it alive, I often think of music as "the other man". 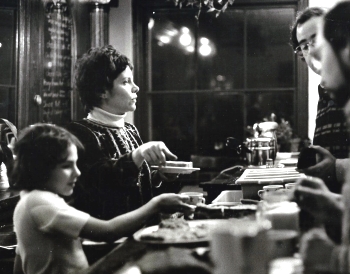 One of my ventures after the separation, brave but foolhardy, I guess, was to start Westchester County's only Coffeehouse with several other women, later becoming sole owner and adding a restaurant. You can read about that in The Coffeehouse Years. Once that was over, and as the kids grew older and more independent, I pursued a music career that coexisted with the social work career necessary to earn a hefty portion of my family's living expenses. I've been continuously writing and performing, solo or with one or more accompanists, including traditional songs along with my originals. (See a partial list of venues on the Credits page.) I've been able to combine my dual experience in a workshop Ive taught on songwriting for non-musicians, helping participants approach their life issues through a creative medium. (Clearly,I believe in the need for creativity as we navigate this passage we call our lives.) Throughout my career I've given lots of house concerts, so enjoyable due to the intimacy of the setting. People occasionally bring their children. While at first I was nervous, as I don't generally write what are considered chiildren's songs, I've been pleasantly surprised by how much most children enjoy my work. Apparently my "inner child" has a knack for speaking to them.

For many years I lived in Woodstock, where I had the pleasure of partnering, in life and in music, with Steve Knight, the former keyboard player for the heavy metal group Mountain, who played with them at the Woodstock Festival. We performed together (calling ourselves "Knight and Davis--We Are The Ones"--corny but catchy). Steve was a magnificent musician who played lots of instruments, although his favorite, the tuba, didn't make it into our repertory. He also wrote and sang beautiful songs. His playing enhanced my music immeasurably, and I miss it.

I am now a Californian, having recently moved to the Bay Area. My life thus far has been busy, hectic, trying at times, and despite some unanticipated misfortunes along the way I'm enjoying the journey immensely. This journey is not over! I'm ready to bring my music to a new audience.

I look forward to it. I'd love to meet you.